Bubba Kush is a very popular Indica strain among marijuana enthusiasts. The exact lineage of this strain is unknown, but it’s thought to include a little Afghani and OG Kush. As a near 100% Indica, you can expect some strong, sleepy effects. After a puff or two, you’ll begin to feel muscle tension ease away and a pleasant, happy, and euphoric feeling will quickly replace any stress and worry. Unlike many Indica strains, the buzz starts in the head before gradually making its way down into a heavy body stone 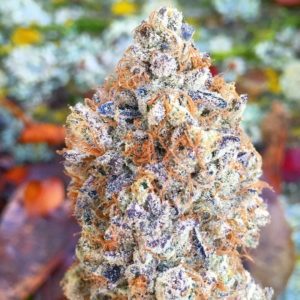 What is Bubba Kush?

Bubba Kush is an indica strain that has gained notoriety in the U.S. and beyond for its heavy tranquilizing effects. Sweet hashish flavors with subtle notes of chocolate and coffee come through on the exhale, delighting the palate as powerful relaxation takes over. From head to toe, muscles ease with heaviness as dreamy euphoria blankets the mind, crushing stress while coercing happy moods. Bubba Kush exhibits a distinctive, bulky bud structure with hues that range from forest green to pale purple.

Bubba’s stocky plant stature and bulky bud structure suggest Afghani descent, but its genetic origins aren’t certain. The breeder whom this strain was named after states that Bubba Kush emerged just after 1996, when an OG Kush hybrid pollinated an unknown indica strain obtained in New Orleans. The mother plant was supposedly Northern Lights, but the genetically ambiguous indica was simply called “Bubba.” Bubba Kush has flourished from its California roots ever since.

BUBBA KUSH IS AN INDICA MARIJUANA STRAIN THAT OFFERS MANY MEDICINAL AND RECREATIONAL BENEFITS. PICK UP THIS STRAIN IF YOU’RE LOOKING TO RELIEVE STRESS, PAIN OR INSOMNIA.

Bubba Kush entered the scene prior to 1998, and it’s dominated the cannabis world since. This strain is a powerful Indica that will ease your mind and body with a wave of euphoric bliss. This strain has average THC content, usually floating between 14-22%, and is an excellent medical option for a number of marijuana patients.

Indica is one of the two primary types of cannabis plants. Unlike sativa, indica creates a relaxed,  effect often described as a “body” high. By educating themselves about the differences between indica and sativa, consumers are better able to customize their high.

Because the indica body high can be quite intense, it’s advised for those who are inexperienced with marijuana to be cautious when consuming indica marijuana strains.

Cannabis indica is useful for much more than insomnia, however. Strains that are indica-dominant are excellent for the following conditions:

The indica body high means that it is an exceptional muscle relaxer or antispasmodic. It’s a helpful treatment for those with diseases like multiple sclerosis—diseases that cause painful muscle spasms. Because the effects of marijuana kick in fast when it’s smoked or vaporized, this makes it an effective way for patients to get quick relief. Buy Bubba Kush Online

Their properties make it a wonderful headache , particularly for people who suffer from migraines. Cannabis can be a helpful for patients who have failed to respond to  headache or who cannot tolerate the side effects from those types of drugs.Buy Blackberry Kush Online

Due to their calming effects,they are highly for those who deal with health attacks.

This strain is great for the evening or nighttime. You’ll feel a strong indica body-high along with a pleasant, uplifted mood. It’s not powerful enough to knock you out for the night, though. There are a few theories about this strain’s genetics floating around. The standard is that this strain is a cross between Blackberry and Afghani. Bubba Kush

However, many believe that some of DJ Short’s Blueberry and Bubba Kush are in the mix as well. Regardless, this indica is a crowd-pleaser. It has a high THC content that can reach 20%. It also features a little CBD, making it good for those with anxiety, muscle pain, and mood disorders.Buy Bubba Kush Online